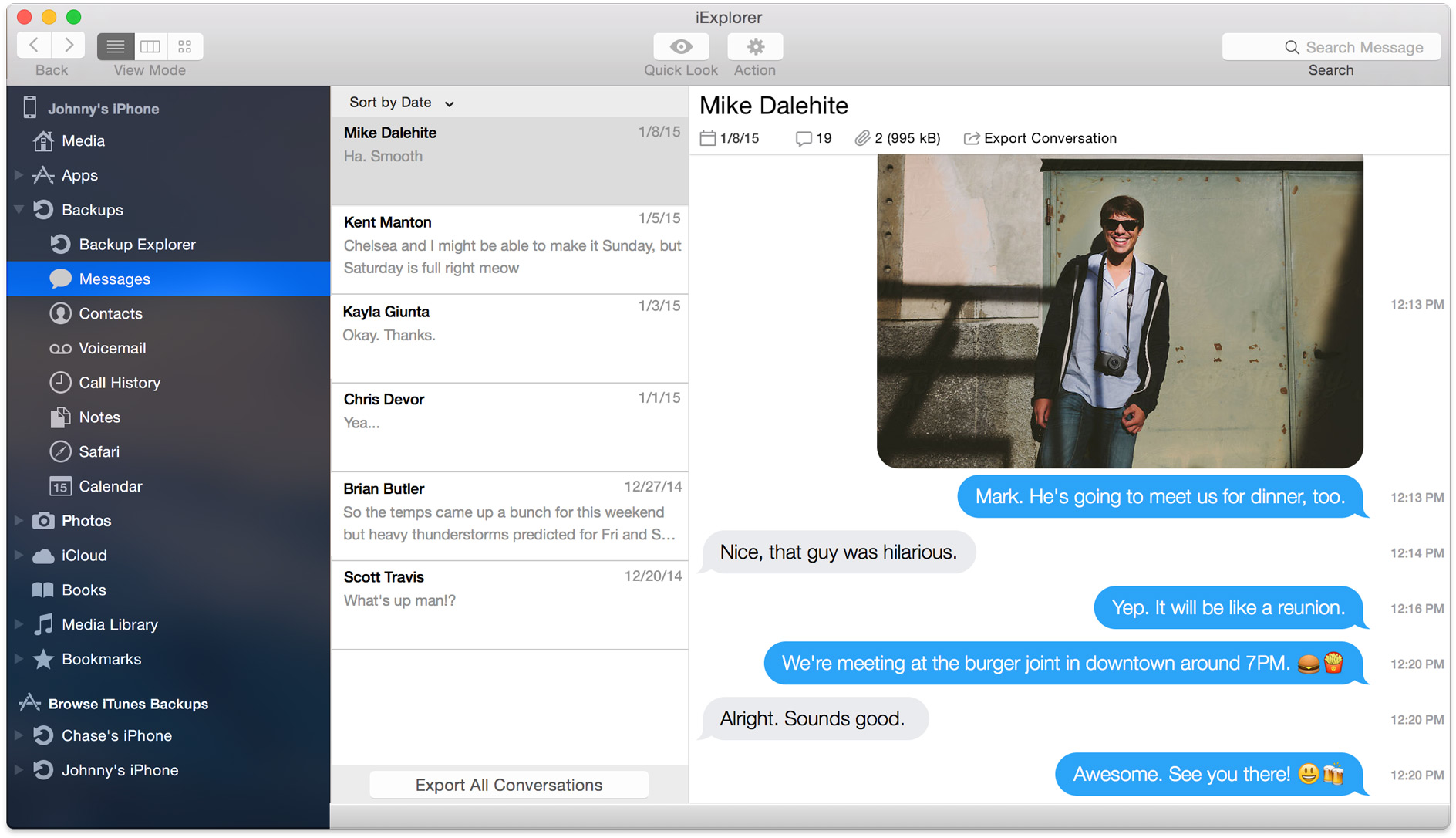 iExplorer is now fully compatible with the brand new iOS 8, iPhone 6 and iPhone 6 Plus. We’ve even updated the new Mac version to work with the latest pre-release of OS X Yosemite.

iExplorer’s iPhone Messages manager now has a beautiful new interface that is more powerful and easier to use.  Each conversation thread now displays its disk space used, the number of images and attachments it contains and its message count.  You can now filter and export conversations by date-range or simply export messages using improved drag and drop.

This is a 100% free upgrade for existing iExplorer 3 customers.  New users can download the new iExplorer demo today for free!

Today we’re excited to announce iExplorer 3.3 for Mac and PC which is loaded with new features and fixes.

Decrypt iPhone Backups
Prefer to keep your iPhone backups created with iTunes encrypted? Not a problem! There’s no longer a need to adjust your backup settings in iTunes. You can now access any encrypted backup in iExplorer and export and save data from it such as text messages, voicemail, notes and more by simply entering the encryption password.

Additional Bug Fixes
We’ve knocked some bugs that were affecting certain users and also improved a lot of small details. Here’s a short list of some of the bigger ones:
- Fixed a bug in iExplorer PC where shared images in a text conversation would sometimes become distorted in the exported PDF.
- Fixed a crash when exporting photos to iPhoto on a Mac.
- You can now delete multiple files and/or folders at a time in iExplorer PC.
- Fixes a crash when exporting all notes to a Mac.
- Transferring tracks to a folder in iExplorer PC is now more optimized and will no longer crash due to system memory issues.

Best of all, iExplorer 3.3 is a free upgrade for all existing iExplorer 3 customers! Well worth the wait, Adapter 2.1.0 for Mac is available now. With a backend powered by the latest FFmpeg and previews rendered by an integrated VLC, Adapter makes video, audio and image conversion the way it should be.

Add Watermarks to Photos and Videos

Adapter now lets you overlay layers to your media. Need to add a watermark? Want to burn in subtitles?  Include an audio track?  Use Adapter’s layers.  Just drag in media files, create the layers you need and click convert.

Not only can adapter handle basic video transcoding such as MKV to MP4 or from MP4 to AVI, but it can also convert image sequences to video and vice versa. Drop a sequence of images into Adapter and Adapter can make a time lapse video. Or, pick a video and Adapter can export its frames. Or select Animated GIF as the output and drag in images or videos. Adapter doesn’t care. Either way you’ll end up with what you’re expecting. Making image slideshows is just as easy: drop in the images, set the image duration and click Convert.

These are just a few of the new features in Adapter.  Adapter 2 is freeware and is available for both Mac and PC.  Check out Adapter’s new website to learn more and get the download.

iExplorer Mobile (formerly “Awesome Files”) is in the Macroplant shop for some serious repairs.  We will return it to the App Store as soon as possible.

(PS - When it’s ready, the updated version will be way cooler.)

We’ve renamed our app “Awesome Files” to “iExplorer Mobile.” Why? Awesome Files’s big brother has always been our app iExplorer on Windows and Mac. This has created some confusion along the way. The two apps make a perfect pair, and we wanted to make that connection clearer.

Free until February 1, 2014!
Normally iExplorer mobile is $5, but until the end of the month, we’re giving away the app completely free!

We’re very excited to announce the release of Adapter 2 for Windows! This update has been long past due but was worth the wait.  Adapter 2 brings FFmpeg and VLC together in an intuitive interface with file size estimations, previewing and batch conversions for any media format.

Time Lapse (Image Sequence) to Video
To create a time lapse or stop motion video from images, simply drag your images into Adapter.  Then select a preset video format (such as iPhone 5s, Apple TV, AVI, etc…).  Click convert.  Boom!  Done!  It really is that simple.   Optionally, you can easily adjust settings such as the frame rate or resolution.

Video to Image Sequence (frame export)
To export the frames of a video to an image sequence, just drag your video into Adapter and choose the image format you want (jpeg, png, tiff, gif, etc…).  Click convert.  Done!  Optionally, you can adjust the time trim settings to export just a particular portion of the video.

Animated GIF Maker
If you want to make an animated GIF from a video and post it on reddit - Adapter is now your go-to app for this.  With the latest version of FFmpeg the animated GIF quality has been vastly imporved from its predecessor.  Simply drag any video or image sequence into Adapter.  Select the Animated GIF preset [Video] >[General] > [Animated GIF (*.gif)].  Adjust the time cropping (trim) to select the region of the video you want.  Set your output resolution and frame rate.  Click Convert.  Done!  Of course the next step probably involves uploading it to imgur and posting the link to reddit.

FFmpeg Command Line Access
FFmpeg is the insanely powerful and versatile tool that powers much of the back end of Adapter.  The most useful FFmpeg commands are readily accessible through the Adapter UI, but building out a GUI for every possible option would confuse even advanced users.  In order to keep Adapter’s interface intuitive to use and not limit the features of FFmpeg we built in a really awesome command line tool.  It shows the commands Adapter’s interface sends to FFmpeg and even allows you to edit those commands any way you like.

There are a ton of new features in this app and we’re currently working hard to update the website and racing to catch the Mac version up to speed.  Stay tuned for more updates and download the new Windows version of Adapter today!

And one more thing - Adapter is still 100% freeware!

We just completely updated the Macroplant homepage and added a brand new blog platform here at blog.macroplant.com.  You can now even post comments below each blog entry so let us know what you think!

During the last few of months, Apple and Microsoft have been releasing tons of new software and hardware products.  We’ve been working hard here behind the scenes to make sure that all of our apps here at Macroplant are compatible with all these new devices and operating systems.

In summary, all our apps are now fully compatibly with Mavericks, iOS 7, Windows 8.1, iPhone 5s, iPhone 5c and the iPad Air.